"To increase compliance with existing off-payroll working rules (IR35) in the private sector, Budget 2018 confirms that businesses will become responsible for assessing an individual’s employment status and determining whether the rules apply."

1. It is fair that two individuals working in the same way pay broadly the same income tax and National Insurance contributions (NICs), even if one of them works through a company. The off-payroll working rules were introduced in 2000 and require that individuals who work like employees, but through companies, pay similar taxes to other employees.

2. Contractors who do not comply with the rules pay significantly less income tax and NICs than an equivalent employee. HMRC estimates the cost of non-compliance to the exchequer will reach £1.3 billion a year by 2023-24.

3. The reform will bring the private sector in line with the public sector, where evidence suggests compliance has improved since the reform was introduced in 2017. HMRC estimates the reform has raised £550 million in income tax and NICs in its first year.

4. The off-payroll working rules only affect people working like employees and through a company. They do not apply to the self-employed. 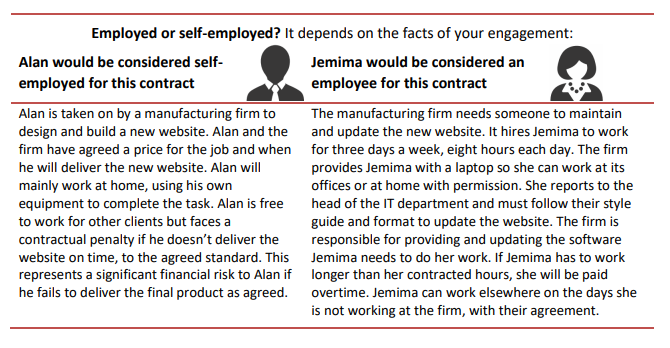 What does the reform mean for businesses?

5. From 6 April 2020, medium and large businesses will need to decide whether the rules apply to an engagement with individuals who work through their own company.

6. Where it is determined that the rules do apply, the business, agency, or third party paying the worker’s company will need to deduct income tax and employee NICs and pay employer NICs.

7. The government has listened to business and will build on learnings from the introduction of the reform to the public sector. As a result:

• the existing rules will continue to apply to the 1.5 million smallest businesses.

8. HMRC has developed the Check Employment Status for Tax (CEST) service to help businesses determine whether the off-payroll working rules apply. HMRC will continue to work with stakeholders to improve further CEST and guidance before the reform comes into effect.

Responding to the consultation

9. Since the introduction of the public sector reform, and during the consultation, the government has listened to the views of stakeholders. On that basis, it can confirm:

• the reform will not stop anyone working through a company if that suits them, and does not apply to the self-employed

• HMRC will provide extensive support and guidance to help businesses implement the offpayroll working rules to ensure they apply them correctly, and will ensure the guidance is appropriate to the needs of the private sector, which are more diverse than those of the public sector

• HMRC continues to work with stakeholders to identify improvements to CEST and wider guidance to ensure it meets the needs of the private sector - enhancements will be tested with stakeholders, operational and legal experts before the reform is implemented

• the government has monitored the public sector reform, including by engaging with the sector during consultation and evidence shows that compliance is increasing without impacting market flexibility. The government will continue to monitor tax receipts as data becomes available

The Public Accounts Committee’s findings are cause to worry for companies, taxpayers and our economy, experts warn.

A ‘not doing enough’ taxman is told to stop ‘fiddling’ and find fixes for the ‘structural problems’ in his ‘poorly implemented’ off-payroll rules.

While advisers bicker about a bloody nose or not for the taxman, one limited company director must prepare to have her status picked apart for the fourth time.

The radio presenter is found wanting on a range of status factors, to the tune of £140,000.

IR35: Eammon Holmes condemns HMRC as ‘the department of thievery’

The TV presenter goes off-script to tell viewers what he really thinks of the taxman.