There are now just a few hours left to make a submission to the House of Lords committee investigating April’s off-payroll reforms. If you’ve been putting off making a submission, then now is time to act, writes James Poyser, CEO of inniAccounts.

It’s not too late -- and if you’re short on time it’s important to prioritise your message to maximise your punch. Read on and we’ll tell you how.

As most contractors are aware, the Lords Finance Bill Sub-Committee was appointed on January 21st, and on February 5th they opened a call for written evidence. The deadline for submissions is 23.59 today, Tuesday February 25th.

In this call for evidence, the Lords have listed 12 areas where they’re seeking feedback from the contracting community, ranging from the impact on the public sector, and using CEST, right through to the future impact on employment rights.

Why you should come forward with YOUR evidence

Over the last few weeks, hundreds of individuals and organisations have submitted evidence, and yesterday was the third oral evidence hearing in Westminster. So far, we’ve heard from trade bodies, professional bodies and recruiters. With so many submissions, and high-profile witnesses, you’re probably wondering what’s the point of submitting evidence.

When you read the Lords’ 12 questions, it’s clear that there are some areas where professional bodies are the ideal parties to submit evidence. But conversely, based on the feedback we’ve seen on offpayroll.org.uk, there are a few questions which present the perfect opportunity to share valuable first-hand impact experiences with the Lords. You have a unique perspective, and it’s important your voice is heard.

Don’t worry, the Lords have made it very clear that you do not need to answer all 12 questions. Instead, perhaps just pick one, and answer it well – with evidence. To help make the process even quicker, we’ve shortlisted the questions which the Lords pose that we think are best-suited to contractors.

Those relevant questions are in bold, below, and our prompts for you are underneath. We’ve also put -- in brackets -- which number these questions are in the Lords’ initial call for evidence.

Contractors, did you PM or work in a project office in the public sector after the 2017 IR35 reforms? If so, what impact did you see on projects? Did contractors and consultants leave mid-project? How long did it take to backfill? Do you think the same will happen in the private sector?

Contractors, HSBC and Lloyds and others have banned PSCs throughout the entire supply chain. Small consultancy firms who should have been exempt from April’s changes have been dragged into scope. Has this impacted you, and how? Has your PSC been banned indirectly and with what impact? Or perhaps you run a small consultancy firm that’s been impacted; what does that impact look like?

PSCs, many people have already submitted evidence about the technical shortcomings of CEST (such as it not explicitly testing for Mutuality). So instead of talking about this, why not tell the Lords about your experience of being assessed using CEST? Was it completed by someone who was suitably trained, and what happened? Were the questions clear enough or what were the issues encountered? Was it easy for the assessor to complete? If you disagreed with the answers, why?

Contractors, assuming your client hasn’t just banned PSCs, all contractors should be given a written SDS (Status Determination Statement). If you disagree with the outcome, you should be able to appeal. Has this been your experience? Were you told you could appeal? If you appealed, do you think the process was fair? Did you feel listened to? Did anything you do change the initial determination? Have you had your contract terminated after appealing an SDS? Are you too worried to make an appeal?

PSCs, if you’ve been determined inside IR35, it’s likely that you’re now paying employment taxes, but without full employment rights. Is that fair; what do your finances look like? How will it impact you? Why is this different to being outside IR35 using a PSC? Are you worried about what this means for future workers?

Know before you go (and submit)

Once you’ve penned your answer, the submission process is relatively straightforward. You’ll just need to put it in a Word document, number your paragraphs and email it along with your contact details to financebill@parliament.uk or see this Lords' webpage for further details. 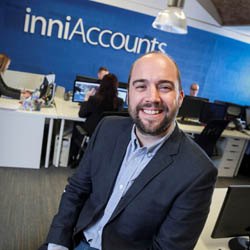 James is the CEO and the man responsible for setting the direction of inniAccounts.

Are we all ready for the new IR35? Not according to HMRC’s straw poll on its latest webinar.