Why April 2021’s IR35 changes are problematic for contractors, and the UK as a whole

And the Christmas holidays and New Year may have seen even fewer one-person businesses launch if, as looks likely, the government implements the reformed IR35 legislation from April 6th 2021.

The bottom line is this -- after the dual shock to the economy from the covid-19 pandemic and Brexit, now is definitely not the time to be hampering UK plc with new and unwieldy legislation, writes Mike Hampson, CEO of Bishopsgate Financial.

Shock to the system

While it aims to clamp down only on disguised employment (i.e. where contractors who aren’t really proper contractors pay less tax than full-time employees), it could result in much less work in the UK overall.

Why? Well, the legislation comes into force in the very same year that it becomes harder to bring in skilled individuals from the EU 27. The UK is also facing a talent gap in key sectors, such as financial services which is heavily reliant on contractor talent. On top of all of this, we have seen the massive uptick in remote and home-working due to the pandemic and this could further facilitate the export of work to cheaper, offshore locations.

Unfortunately, the UK already has sluggish productivity and due to the uncertain environment caused by Brexit, investment is already low. We strongly believe that IR35 acts as a further disincentive for business leaders to invest. All this makes it seem like the new off-payroll rules from this April are another deliberate act of self-harm by the government.

Such ill-conceived red-tape underlines that the government has little understanding of how many business sectors operate and the realities of the commercial world. It also seems to have little appetite for collaboration with industry to find solutions, preferring instead to just throw challenges at firms and leave them to their own devices.

It’s extremely difficult to see why now is the right time to add more complexity and regulation to doing business here in the UK. Contractors are frequently used to deliver ring-fenced projects, and their skills are needed on a temporary basis. For example, to implement a new IT system or bed-in a technological process. They are expert 'guns for hire' who specialise in doing that one, hard-to-master thing, typically with experience from different organisations. These workers aren't ‘lifers’ who have spent 20 years at one workplace and only know a single company’s approach. These people bring a wealth of knowledge and ideas, with businesses benefitting from this fresh thinking.

Contractors are recruited as needed, do what's required and then move on, leaving what they've built for permanent employees to take on. They are also prepared to move around the country, uprooting themselves during the working week or for the life of a project, which in itself provides ancillary benefits to the hospitality industry, and provides a vital part of the UK's flexible workforce. These are just some of the realities of contract working which appear lost on government.

For smaller companies, freelancers provide a valuable way to scale-up and down. This freedom allows businesses to grow and really supports entrepreneurship. As start-ups expand, they move to having more full-timers on board but contractors are often a necessary, irreplaceable foundation.

What our government also doesn’t seem to really grasp is just how much these people are highly skilled, often with expertise in tricky, value-add areas like cyber security, data science, project management, strategy and creative thinking. These capabilities are in high demand worldwide, and there just aren't enough of these individuals to go around.

So, why should these people stay in the UK? Many of them had a dire year in 2020 and were unable to access government support from the coronavirus when they needed it. They are already frustrated with the country. They are also used to being in charge of their own destiny. Government ought to also remember and understand-- these people don't want to be tied into a conventional career. They love the perceived freedom they have to travel, do different things and to work for different people.

I have seen first-hand that many skilled contractors have upped sticks and either moved abroad or now only work in other markets, because the government fundamentally misunderstands the contractor workforce. A relearning process is massively overdue.

In the run-up to the previously proposed reform of IR35 for the spring of 2020, the lack of clarity and changing tone of announcements from the government resulted in many firms deciding on a ‘blanket’ ban of limited company contractors, under which these people had to move to being employed, rather than the firms taking a more nuanced approach (even though the legislation technically allows them to).

It's easy to understand why this happened. The cloudy nature of government and HMRC communications meant companies had to avoid exposing themselves to unnecessary risk, as the official advice was unclear and seemed changeable.

While many financial services companies scrapped freelancers as they were understandably afraid of falling foul of the Revenue, others were happy to allow Personal Service Companies to continue to operate.

We saw larger recruitment agencies with Preferred Supplier List (PSL) status using this uncertainty for their own advantage, forcing through effective pay cuts for the contractors on their books, effectively creating umbrella companies by putting them on payroll but at the same time preserving their own margins.

Many businesses and their HR departments are quite understandably risk-averse and under pressure. This resulted (earlier in 2020) in some larger management consultancies consolidating their positions. When the legislation finally comes into force in approximately 100 days, this consolidation will likely continue and the net result could well be contractors facing reduced income and clients facing higher costs.

For individual consultants, who are accustomed to be genuinely outside IR35, many are finding that they are no longer able to use their limited company, discouraging them and many other valuable experts from going forward to work on a business-to-business basis.

With a hell-bent HMRC, what’s the ‘not heavy-handed’ pledge really worth?

On the ground, HMRC is going to oblige hirers to determine tax status within 45 days. Yet, consultants are being advised that the hiring client won't allow PSCs whatsoever. At the same time, there are worrying retrospective taxation aspects being introduced with the law. For example, some fear contractors may be at risk from HMRC trying to retrospectively claim NI from them for up to ten years. This prospect exists because whereas once the government could be trusted to only change taxation on a go-forward, prospective basis, the loan charge demonstrated that governments are quite happy to change tax law retrospectively. And punitively, targeting individuals as the easy to squash, low-hanging fruit.

Potentially reassuringly, chancellor Rishi Sunak said in early 2020 that the government would not be ‘heavy-handed’ in the first year of private sector IR35 reform. But this pledge does not really address the underlying issues. Unfortunately in HMRC’s hell-bentness to combat disguised employment, many bonafide freelancers are getting caught up. Rather than demonising the whole contractor community, HMRC should work on its unclear (and weak) definition of ‘disguised employment,’ so the department targets non-compliance more specifically-- the ‘permie-tractors,’ not the bonafide contractors.

In 2021, a radical but recommended approach would be for HMRC to overhaul our current tax system to fix the broad-brush approach that it wrongly relies on with status. Now could be the ideal time to make this overhaul, in wake of both the pandemic forcing changes to work patterns and preferences, and as the UK stands alone after Brexit.

Tinkering with existing tax arrangements does not cut it. We need a root-and-branch review and wholesale change. A simplified system with clear definitions, making it tough for people to dodge taxes is achievable, with the result that companies won't have to apply a blanket ban on limited company suppliers which risks damaging the UK's economic recovery from coronavirus. This tax system overhaul could also be used to stimulate a much more entrepreneurial and dynamic economy, which the body I quoted at the outset of this piece -- the ONS – would likely agree we sorely need.

Finally, I hope we’re wrong but at the dawn of 2021 our gut feeling is this -- that HMRC's unclear direction on IR35, over a prolonged period, has spooked many UK businesses into shedding their flexible workforce. This shouldn't be the case, in terms of cause or effect, but it is the case. Unfortunately, because it too fails to understand the freelance, flexible workforce and all the financial benefits that its members and partners bring, the Treasury is in tow – looking set to kill the goose that lays the golden egg, potentially over a few bad apples. As all those countless individuals potentially in IR35 reform’s way will tell you, the government’s blinkered approach to get the reform reverberating through UK plc in just 13 weeks’ time could cause a new peak in adverse, unintended, irrevocable consequences. 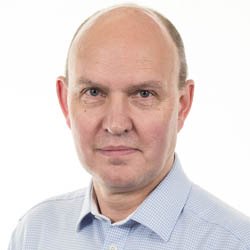